Christopher Dawson-Morris and Trish Chalk from Aneurin Bevan University Health Board, share their approach to a more conversation-driven and dynamic approach to planning. 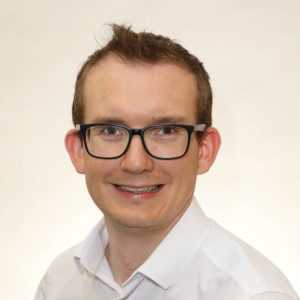 What’s the point in a plan? The health service isn’t short of plans, strategies, frameworks, visions, and plenty more documents beyond. Too often these plans start with people like us from the corporate centre of your organisation, or another body with a four-letter acronym, sending out a template to ask for information.

These templates usually land without clear understanding of their purpose or recognition that the operational team already gave the material to another person in a slightly different format the week before. The information gets pulled together, not always with the correct context, and hey presto we have a plan!

We can now forget about it until next year.

The purpose of plans at an organisational or system level in the NHS isn’t always clear. Our approach is that plans at this level should aim to achieve three things: tell the system story, allow people to see where they fit in that story and prioritise within the context of that story. To achieve these things the process is more important than the plan.

In the context of ‘post-COVID’ policy we wanted to develop realistic activity plans that are owned by our teams, focus our organisation on long term sustainability rather than just short-term recovery and give a clear and consistent optimistic story about what we were trying to achieve. A story of realism, sustainability and optimism.

In our attempt to accomplish this we ditched templates and focussed on quality information and conversation.

The Process not the Plan – Dynamic Planning

In developing our plan we didn’t send any templates to our operational teams, instead we adopted a scenario-based approach. Working with a data partner we built a dynamic planning tool which allowed us to derive a scenario of what was likely to happen in our organisation in the next year.

The tool drew on multiple existing data sources which we were able to link together, factored in assumptions around COVID-19, workforce constrains, clinical prioritisation, population demand and capacity assumptions. Importantly the tool allowed us to model the consequent impact of actions in different parts of the system, for example impact of emergency demand on theatre capacity and outpatients. We wanted a tool that enabled all teams to see the system, elective, emergency and the whole pathway from referral to treatment to discharge.

…we didn’t send any templates to our operational teams, instead we adopted a scenario-based approach.

The tool also allowed us to support teams in understanding the totality of potential demand on their service area, factoring in people currently waiting for care, historical demand patterns and assumptions about patients not referred during the pandemic.

The big unknown question was: what about all the people we should have treated? For an assessment of unreferred demand we calculated the number of referrals which hadn’t appeared in our system. We then reviewed with primary and secondary care clinicians, the likelihood of these referrals presenting and at what stage were they likely to present. This enabled an understanding of total potential demand on a service and the risk both to capacity and potential for population health deterioration. 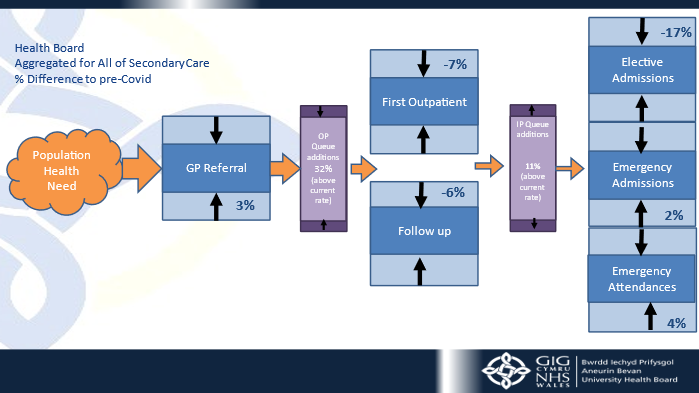 The most important part of the process was the conversations. Intelligence led, honest and connected conversations. We worked through the scenarios with operational teams, testing assumptions, understanding workforce and development plans, considering where support was needed and ensuring ownership of actions and activity. The ability to show a team’s impact on other parts of the system was crucial to the process. This immediately moved the conversations on from ‘if only we had more theatre time than the other specialty’, as we could show transparently and openly the impact on demand and flow by showing the scenarios of different access. We amended and adapted the scenarios in the meeting, we didn’t have to take a question go away and remodel but make adjustments in the room with clinical teams, workforce and finance partners together.

The conversations were powerful and free flowing because they were about system, there wasn’t ‘othering’ or the separation that can come from amalgamating templates from different teams. They were powerful because teams could see their impact on the system, view their part in the pathways and openly and honestly talk about impact and actions. They were powerful because everyone was in the room; clinical, management, finance and workforce. Transparency was key, this wasn’t a made-up demand profile setting unrealistic expectations but a true assessment to be owned and delivered. The outputs were a most likely scenario for each specialty which contained, activity (inpatients and outpatients), beds, theatre hours and additions to the waiting lists.

From here we could scale up to the organisation clear choices about where to prioritise resources which were intelligence led and informed by the clinical conversations. This led to the organisation placing Care of the Elderly Services at the centre of our plan because we know and understand the population, service and flow impact of improving care for this cohort of patients improves care for all.

This is the start of a process and a new way of working and we’ll need to see how successful this plan is in the real challenge of delivery. I often read this type of blog and think, was it really like that? I’m sure there will be people who were part of the process who don’t fully recognise what’s written here and there were challenges in getting to this point. However, the process felt good, there was genuine engagement and ownership of the planning process. We have a plan which is realistic, focussed on sustainability and optimistic about the organisation, now to deliver. And a final thought – this is a dynamic plan it will adapt as things change and we learn together.

‘Planning is important – the plan isn’t.’

What are the big priorities for the NHS – and how can the Q community help?