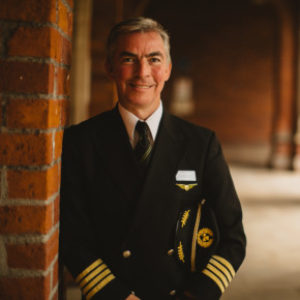 Niall qualified as a doctor from Trinity College, Dublin in 1993. He trained as a surgeon in Belfast and received his FRCSI in 1997 before returning to Dublin where he worked in the National Cardiac Surgery Unit.

He subsequently retrained as an airline pilot with Aer Lingus in 1999 and combined aviation with medicine by working as an Accident & Emergency doctor for six years before focusing fully on aviation. After operating as a co-pilot on both the European Airbus A320 and Trans-Atlantic Airbus A330 fleets, he qualified as a captain in 2010. He is currently operating out of their Dublin base on the Boeing 757 Trans-Atlantic fleet.

In 2011, he formed Frameworkhealth Ltd, a company providing aviation-style safety training modified specifically for healthcare which draws on his twenty-five years of experience between both industries. He is currently providing courses for the new practice based pharmacists in conjunction with NICPLD and has recently spoken at conferences in Northern Ireland, Republic of Ireland, Alderhey Trust in Liverpool and the Homerton Hospital in London. Internationally, he has spoken at the World Football Academy Expert Meeting in Lisbon on Error Management’s application in soccer and is booked to speak at the European Solid Organ Transplantation conference in Copenhagen in September 2019. In 2016, Niall was a speaker at TEDx Stormont in Belfast. He is also advising the new Improvement Institute which is being set up under the recent Bengoa Report on how aviation can help healthcare address the huge issue of human error and learn to manage it.Newry